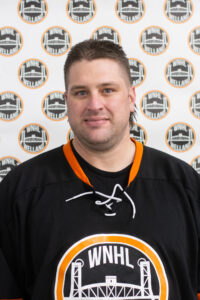 Baz has paved his way into WNHL glory with one of the hardest shots in the league.  A shot that was honed over the years by dominating the Garden City hockey leagues.  After joining the WNHL and spending years grinding out a tough career as a member of the Stelcobras, Baz was rewarded by being named GM one one of the new expansion teams.  He quickly drew up his best logo and roster and set out to win the King Street Cup.  Things were looking good for Baz and the Dusters until the pandemic ended their Golden Knight like run to the Cup.  Baz remains focused on his two goals of winning the King Street Cup, and brining the filthiest mullet to the game.